First of all, Zac was 13 months old when he travelled - he was pretty big, and not yet able to walk unassisted. It’s worth knowing that after you have booked your flight, you need to ring up the airline and:

I still recommend that you bring your own food for your little ones, since the quality of the baby meal varies enormously. Speaking of which, for the purposes of packing baggage, you are allowed an additional item in the checked luggage (such as a pram) and an additional carryon bag. Whether you get a bassinet seat on the plane depends on how many babies there are on that flight. All your food should be commercial pre-packaged stuff, long life milk cartons, etc. Don’t worry too much about keeping to 100ml quantities as long as the cartons are unopened. Once all your food is assembled, it needs to go into 1 litre zip-lock bags, lest your baby’s milk leak and bring the plane down. You can get specifically sized bags from the supermarket in the travel toiletries section. Note that all the above was for flying Qantas out of Melbourne, and these rules shift all the time, so you’d best check yourself before you fly.

When you get to check-in, and give the airline your pram, they will give you a temporary umbrella pram for use around the airport. You can go to the gate, and let your littlie crawl around the terminal having fun. Our experience was that Zac was super-interested in everything that was going on and didn’t find it too worrying.

Once on the plane the real challenge of keeping your bub quiet and contained begins. The immediate concern is takeoff and equalizing their ear pressure; we did this by opening a long-life carton of milk into a bottle and letting Zac drink it from take-off all the way through assent. Once he stopped being thirsty we switched to a dummy. For take-off you will be given (or may need to request if your cabin staff aren’t experienced with kids) an infant seatbelt, which loops on to your own.

If your bub is prepared to use the bassinet, then it can’t be used at takeoff and landing. Zac did fit in the bassinet, but he wouldn’t have a bar of it, especially when we put the straps over the top that act as the baby’s seatbelt while they are in it. A much younger baby who has yet to get to crawling would probably do a lot better, and this in turn would lead to a much nicer flight experience. 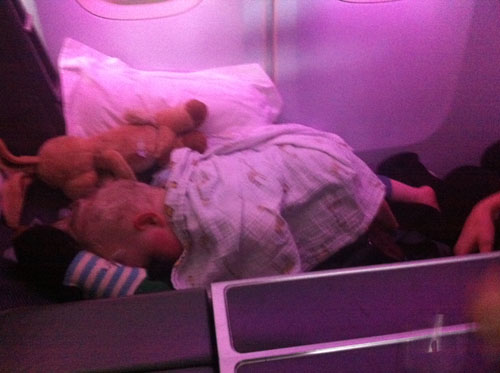 Our flight there was 1:40 hours to Brisbane and 7 hours to Singapore during the day - 16 hours door to door. It was very tiring entertaining and containing Zac the whole time, but it wasn’t a terrible experience, just an exhausting one. Our return flight was overnight, and a direct 7 hours, so we expected this to be a lot better. In retrospect, we would have chosen two day flights. If Zac had been prepared to use the bassinet, it might have been a good flight, but in practice, he had trouble getting to sleep, so we eventually had to wait till dinner was served, and then Amber lulled him to sleep on top of her, and he got about 4 hours sleep for the whole night - we got about 2. Once we were through customs and home, he had his second wind, and despite being pitifully tired, he couldn’t sleep, so I stayed up with him till he went down for his morning nap. His morning nap turned out to be 3 hours, and he normalized his sleep patterns after that. I am extremely glad that I was able to arrange for my mum to be coming over that day. I figured we would be tired from the flight, which is why I arranged it, but I had no idea that we would be working on 2 hours sleep and a lot of travel.

Incidentally, the flight crews seem to vary a great deal in how they treat babies. I’ve heard that a lot of people have either very good or very bad experiences. On the way there the flight attendants told us to spread out and used as many seats as we needed, and helped distract Zac every so often. On the A380 back, the crew were unprofessional, noisy and discourteous. Still, we made it back in one piece.

A last note… Amber & I packed a couple of things on our carryon luggage for ourselves, in the foolish thought that we might get some time to ourselves. This didn’t really eventuate, and if in future I had spare time, I’d probably go with sleeping, to offset the sleep lost in transit. Zac is very into books, so we took a lot of those. Don’t take small toys - it’s better to take one or two big ones. The small ones will be hurled under seats and in other crevices within the first thirty seconds of them being out.

Anyway, that was our experience - I’d love to hear from any other parents who have travelled with little ones, and hear any tips they might have.